So I love to read. I will read just about anything and everything but 95% of the time it’s YA books. If you don’t like YA, don’t read this because it is not for you and that’s fine but these were my favorite books I read this year. I picked 10 books, which is always a struggle.  I picked first based on my goodreads rating (they’re all 5 stars) and then just personal preference. I do allow the same series to appear multiple times, which makes things harder, especially if I read an entire series in a month. They’re technically ordered 1-10, 1 being the best, but honestly they were all favorites this year.

So yes I’m sure you noticed a few things mainly:

a) I did not read harry potter until very recently and

As for Harry Potter, I don’t really know why I never read them. I was little when they were a big thing and my mom was reading me the first but we never finished it before the movie came out. I’ve seen all the movies, which is why I think they’re not as high up on the list, just because I kind of know what’s going to happen. But I must say that one, the movies are really well done. A lot of lines are verbatim quotes from the book. That said, two, the books are so much better. The characters are just so much more fun and the story is better explained and the whole magical world is just brought to life so much more.

As for Percy Jackson, all I ever knew about it was that terrible movie that came out. I watched it once when it was on HBO and did not like it. Then my favorite Booktuber, Polandbananas20 (christine) did “book talks” on all the books. If you’ve never watched her, you should because she’s great and so funny. But she raved about all of them and how she also missed that bandwagon and that she was in her twenties reading what is considered a children’s series. So I followed her lead and read them and was immediately sucked in. They were awesome. I love the writing, it was so witty and I found myself laughing out loud all the time. The world was also extremely well written and I quickly moved on to his spin off series. Like most people I was disappointed with the last book and could have used more Percy (always more percy) but still good.

And finally I suppose I should talk about my #1 book for the year, Queen of Shadows. If you haven’t read the Throne of Glass series by Sarah J. Maas yet, you should. It was a book that was always showing up in my recommended on Goodreads, but I always thought the description sounded awful. Then once again Polandbananas20 put up a book talk and raved about them so I picked them up during reading slump and was hooked. They are so good. I love them. They are funny, action packed, thrilling stories with lots of little twists and turns. I won’t say much because I don’t want to spoil anyone but if you haven’t read them I highly recommend them.

So there you have it. My top 10 books for 2015. I had so many more that didn’t make the cut so hopefully 2016 is equally as full of exciting books. 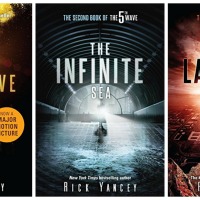