Celaena is Ardaland’s Assasin. But she’s been caught and working in a labor camp. Now she’s being offered a chance at redemption in a “goblet of fire” style contest to become the Kings champion. However, once she’s in the castle strange things start happening, contestants are being murderer and no one knows why or how.

Seriously if you have not started these yet, you need to. This series is amazing. It’s going to be a series of 6 books plus a prequel collection of novellas and it’s an amazing fantasy read with a badass main character and an all star cast. The entire book is filled with excitement, great honor scenes and some male leads so perfect it’s too hard to choose.

The long story…(spoilers ahead!):
Ok so my journey with this book began long before I read it. When I was a junior in high school I got a kindle and became a huge bookworm again (I had been in a reading slump in 9th and 10th grade). After getting this kindle and devouring the hunger games and mortal instruments I dove headfirst into the land of YA and got a goodreads account. From the first day I had the account it suggested throne of glass. And I ignored it. Because it was that hideous cover of the genetic girl holding a knife and the description sounded horrible “Two men love her, the whole world fears her, only she can save them all” or something like that. So I passed. Well it was always coming up as a recommendation and I kept ignoring it until the summer after my freshman year of college (over 2 years later). It wasn’t until my favorite booktuber polandbananasbooks gushed over it and had this beautiful cover that I decided to give it a go, since Christine had only led me astray once (didn’t like the legend series…don’t ask).

So I read it over the summer and thank god the second once was already out and the third was coming out in 3 months because about 50 pages in I had a new favorite series. Throne of Glass is amazing. I’m not looking to summarize the entire book just talk about why I loved it.

So with that said please just let me ramble about everything I loved about this book:

So we have Celaena who is quite possible one of the greatest female protagonists of all times. She is amazing. So snarky, confident, strong, funny, how can you not love her. Her life has been hell, which we get glimpses of here and there. We start with her in a labor camp, she’s been whipped, she was raised by a cruel man who turned her into a skilled killer but also did horrible things like slam her own hand in a door and we still love her. She loves to read. The quote about books being the most powerful ideas of all was gold. Of course if you’re reading these books you probably at least like to read so that line will resonate with you. She loves clothes, and her appearance. She’s not that female lead who could care less about what they look like but is somehow aphrodite to all the men. She knows she’s beautiful and she makes sure she always looks great. She loves her nails and her hair, fine clothes and jewels, shoes and it’s great. It just makes her all the more relatable and Sarah does such a good job of really letting us get to know her and her personality beyond just the story line.

One of my favorite scenes where we really finally see something unbelievably relatable is when her “monthly cycles” return and she is feeing ill. I thought the entire scene was so well done and it was one of my favorites. First of all just the fact that it was mentioned at all. Because how many stories do you read where the main character is out and about her there and everywhere and it just seems like “cycles” don’t even exist for them? I loved that it was included because it’s something all girls have to deal with. But the humor of the scene made it that much better. The fact that Chaol comes barging in thinking she’s faking it and she throws up at his feet. And then he’s all worried and she sheepishly has to admit why she’s ill and he handles it like every guy ever; unbelievably awkwardly. Then of course Mr. Smooth Dorian comes later and handles it like a pro. The whole scene had me in stitches laughing and who would’ve ever thought a scene on said subject would be one of the highlights of the book?

There were so many funny adorable scenes, usually between Celeana, Chaol or Dorian where the dialogue was just so witty and fabulous. Never have I read a book before where I have not been able to latch on to one of the male leads as the love interest right away. And I still haven’t decided. Honestly I was totally find that it seemed like her and Dorian were the romance in this book the entire time, but then any time Chaol did something cute and romantic (I died when he saved her at the end and then she hugged him) I was always thinking that I’d be totally content if she picked Chaol too. And now at the end, she’d done with Dorian (so she says) so I guess it’s Chaol’s turn and I’m fine with that. And that never happens to me. Once I ship something I’m on that ship for better of for worse. I think the problem is that both of them are such great options that how can I be mad at all. I’d be happy with either of them so why wouldn’t she!? So that’s my thought on that and honestly I’m still conflicted over which man I like for her better and probably always will be. It seems like we get to know Dorian more in this book. When Dorian and Celaena spend time together it’s usually doing fun things whereas when Clelaena and Chaol spend time together it’s usually training or he’s there to keep an eye on her. He seems more serious but that doesn’t mean I think he has any less of a shot because I feel like the two guys have developed different relationships with her but both of them clearly care about her and I just can’t decide!

But the thing is the story isn’t about the men. This is not a love story of girl meets boy and that’s that. This is about Celaena which is why it’s so great. This book has so many different aspects to it that it never gets dull. There’s all the humorous scenes, like the chocolate, the puppy, the ball, the banter during sparing practice. Then there’s the entire mystery with what and who is murdering contestants. There’s the mystery of the Wrydmarks and the secret passage to Elena’s tomb. Then there’s the actual contest which is similar to the Goblet of Fire challenges.They always provide good action, and suspense. Like when she does a death defying jump of the wall to save Nox. But then it flows seamlessly into humor with Chaol teasing her about coming in near last.

The only thing that felt really long is the ending fight scene. Yes we’re seeing the same scene from a lot of POVs but it feels like Celaena is broken so early on and then she just keeps hanging in there but it seems like an unrealistically real time. Also the fact that she’s swatting at a bunch of imaginary things that no one else can see. It was so painful to read because she was just getting her ass kicked and it went on and on.

But I love this book. My favorite part was, well I can’t choose. I loved the ball, all the challenges, the “cycles scene”, when she just kills it in the contest even though she’s not supposed to show her hand and knocks that guy right out of the ring, the wall climbing contest, everything. This book was so amazing and I’m so excited that it’s a long series! Plus now my copy of it is signed!!!!

“Libraries were full of ideas. Perhaps the most dangerous and powerful weapons of all.” – Sarah J. Maas 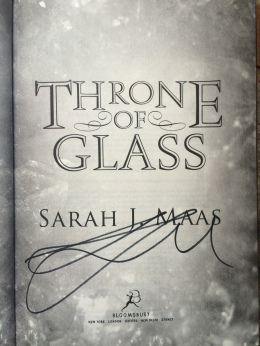