This is another shameless plug for EmiesNook etsy shop. She has new Throne of Glass bracelets and can now put little flames on them so if the release of Empire of Storms has you wanting a Fireheart of Fire Breathing Bitch Queen bracelet check her out. I personally have already ordered my Fireheart bracelet to add to the 5 I already have. Happy shopping! 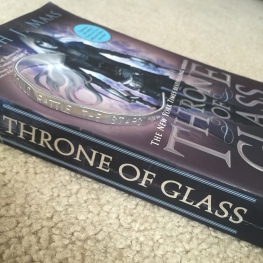 Just finished making some new product for my Etsy Shop! I’ve included some pictures below. If you’re interested in learning more, click the link above, or as always feel free to message me! I’ve also set up a coupon for anyone who needs new swag for the school year (or any other reason). Enjoy 20% […]

So since my Little spoiled me during big little week and decorated my room all week, at activation we spoil them rotten with a basket of goodies. And I went all out. Now I don’t have individual photos of everything that went into it but enjoy some of the highlights!

First thing first, my canvases. Her canvases that she gave me were beautiful so I had to measure up. The first one is just an outline of her home state, Delaware. Her favorite color is red and our sorority color is maroon so I used those colors. The second one is because our family is the “Harry Potter Family” so giving this canvas to our littles is a family tradition. The last one is because we bonded over loving New Zealand and LOTR. I was there this winter for study abroad and she’d just learned she’d been accepted to a program for next winter so I knew I needed a Tolkien Quote with New Zealand featured. 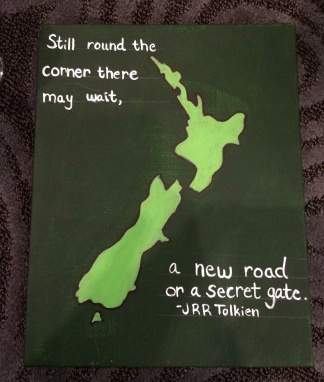 Next I’m sure the eye is drawn to the beautiful letters. I have my fabulous GBig to thank for sewing all of those. I think the marvel letters will be her favorites but hopefully she likes out purple family letters (not pictured) for HP and the others I picked because she likes red.

Of course seeing as me and my little bonded over all things nerdy I had to include some geeky gifts. I got her a Groot Pop thingy to go with the  Groot she gave me during big little week. She also got a copy of one of my favorite new books Fangirl by Rainbow Rowell because I’m sure she’ll be able to relate to it as much as me. While I was in line at Barnes and Noble they had a little Outlander Mortar and Pestle that she had fawned over last time we’d been there so I threw that in. I also found this huge wooden book box that opens so I found a nice quote about books with the word little in it. She can keep her poem in it. I had to thrown a Harry Potter Coloring Book in there because we’re the Harry Potter fam. Not too mention the Harry Potter glasses in there that she had to wear and a mason jar full of popsicle sticks with Harry Potter quotes on them.

I also included 2 pieces of drink ware. I copied the mug she gave me so it says “Today I’m Mrs. _____” and her options were Whitethorn, Greenleaf, Blake, Snow, Fraser, Thor. And then her wineglass is “Wee Jamie”. I tried to give it a kilt pattern similar to that of everyones favorite scottish highlanders James Fraser and then decided to just go for it and give the glass some curly red hair and a beard.

The other super nerdy thing in there was the big wooden letter E. It’s black and just has the names of books, movies and TV shows all over it on all sides. 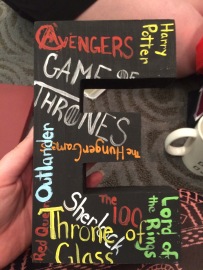 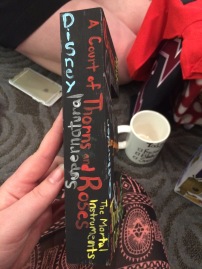 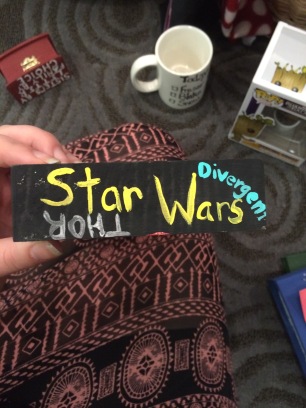 Everything else is pretty much your more standard Big Little Gifts. I had a cute Big/Little picture frame, a little box for her to put her new membership pin in. A little hanging set of letters on a nice Terresan Green background and a tie blanket to cushion the whole basket. 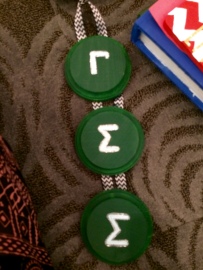 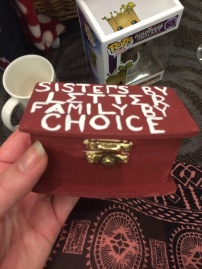 And then the poem I had to write her which gets read aloud by someone else. I thought it was cute. I had plenty of little inside jokes (if you watch Outlander you know the Honeypot reference). And then of course in Fam tradition it had to end with a reference to her Hogwarts house and with our closing line about Hogwarts letters and Greek letter.

But the piece de resistance of the whole basket and what I’m most proud of is the paddle. It is beautiful. It’s fire engine red with “Fire Breathing Bitch Queen” across it, some clashing swords and a vibrant flame. I love it so much. True we’re not supposed to have swears with letters (and it does have letters on it) but technically it is a quote and it’s a Throne of Glass quote so I HAD to do it. I love it so much and think it came out great and if that isn’t enough, my little tweeted it at Sarah J Maas and Sarah LIKED IT!!!!!

That was everything and did I spoil her? Maybe. But I was trying to live up to the fabulous Big Little Week she gave me and almost everything in there was a personal gift of something that helped bring us together so I’ll just say she was worth it. Needless to say I think she was pretty excited… 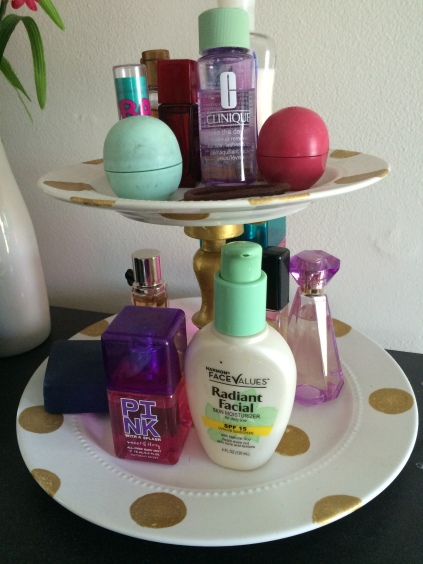 So this is really a very simple craft and pretty inexpensive. I was able to pick up the white plates (1 small and 1 large) at Target for just a few dollars each. I also got the candle stick at target where it was on sale for $3. The gold paint is less than a dollar at Michael’s and the little dotting sponge I used came in a set of paint brushes from Michael’s that only cost $3. You will need:

So let’s start! The first step is to paint you’re candle sticks. Since mine started black I did a coat of white first so the gold paint would show up better. Also just a quick note: the paint really doesn’t have to be gold at all; you could use any color. But after the white dries just go ahead and paint the candle stick all over. 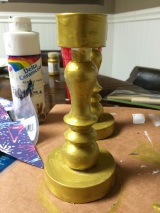 END_OF_DOCUMENT_TOKEN_TO_BE_REPLACED

So here is a pretty simple canvas design. I saw the original idea on Pinterest and decided to try it out. So here’s what you’ll need:

-paint (any colors you want)

So to start just criss cross the entire canvas with strips of tape to get all sorts of little shapes all over it. I marked the edges of my tape with the sharpie so they would be easier to pull up at the end. Once you’re done taping, it’s time to paint. For mine I was going for a purple theme so I only used purples and blues but use any colors you like. Once you’re done let that dry completely before removing the tape. If the paint got under the tape anywhere when you remove it, you can use a Q-tip and some nail polish remover to fix it.

Once all the tape is off it’s time to write on it. Obviously you can write whatever you like but for me this was a sorority gift so it says Gamma Sigma Sigma. I did a test out of what I was going to write on a sheet of paper so I could figure out the middle letter and how I was going to do this weird font.

END_OF_DOCUMENT_TOKEN_TO_BE_REPLACED 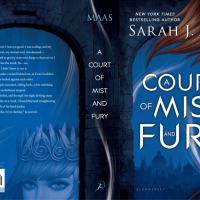